The Contradiction of Christian Passivity

I’m a father of three amazing girls – Samantha (almost 5), Avonlea (3) and Joanna (1).  I have to say, I’m grateful to be a father of daughters, especially after hearing stories from all the boy-dads at our church.  Chris, our lead pastor, and I were talking the other day about the curious case of middle children being surprisingly aggressive against their older siblings. As it turns out, boy or girl, it doesn’t seem to make that big of a difference.  It’s not uncommon for Avvy to push her big sister down or steal a toy Sam’s been playing with. It’s also not uncommon for me to sit there and pretend like I don’t hear Sammy crying, just for a little bit, hoping they will somehow resolve things on their own (which they never do) and I’ll get a pass on dealing with conflict.  Turns out, many, many dads do this.

It’s hard wired into us to want to avoid conflict.  It’s uncomfortable. It’s risky. It’s potentially dangerous.  But the question is whether there’s something wrong with sitting by while injustice happens right in front of us.  It’s a question I’ve been thinking of, not just because I’m a dad, but because I’m a Christian and I live in a world that’s full of darkness – human trafficking, massacres in public schools, refugees without a safe place to run, disease, poverty, abuse of vulnerable populations, sexual exploitation, the mass murder of unborn children… it’s overwhelming.   And like those moments where I’m just too tired to break up another fight between my kids, I often find myself with my eyes glazed over at all the brokenness of this world.

But it’s not my problem… right?

Pilate was the governor of Judea during the days of Jesus’ ministry.  As the representative of Rome, it was his responsibility to maintain order and civility in a region (in)famous for its strange population of religious oddities (seriously, they believe there’s only one god?) with a penchant for armed rebellion.  In Matthew 27:11-23, we read about Pilate’s moment in the biblical spotlight as the Jewish leadership drag a popular traveling rabbi into the governor’s court.

asked him, “Are you the King of the Jews?” Jesus said, “You have said so.” But when he was accused by the chief priests and elders, he gave no answer. Then Pilate said to him, “Do you not hear how many things they testify against you?” But he gave him no answer, not even to a single charge, so that the governor was greatly amazed.

Pilate realized that this man, Jesus, had no real reason to be brought before the official Roman court.  At most, it looked like a theological dispute between a bunch of testy religious types. But Jesus’ lack of response seemed to aggravate the crowd even more, so Pilate tried to politick his way out of a sticky situation:

Now at the feast the governor was accustomed to release for the crowd any one prisoner whom they wanted. And they had then a notorious prisoner called Barabbas. So when they had gathered, Pilate said to them, “Whom do you want me to release for you: Barabbas, or Jesus who is called Christ?” For he knew that it was out of envy that they had delivered him up. Besides, while he was sitting on the judgment seat, his wife sent word to him, “Have nothing to do with that righteous man, for I have suffered much because of him today in a dream.” Now the chief priests and the elders persuaded the crowd to ask for Barabbas and destroy Jesus. The governor again said to them, “Which of the two do you want me to release for you?” And they said, “Barabbas.”

Unexpectedly, the people decided they’d rather have a convicted insurrectionist and murder than a man who went around healing the blind and bringing people back from the dead (if the rumors were to be believed.)  It was pretty clear to everyone that this whole situation was well past the line of absurdity. Seriously, Barabbas?

Then Pilate made a classic parenting mistake: asking a question when you should have made a statement.  “Then what shall I do with Jesus who is called Christ?” 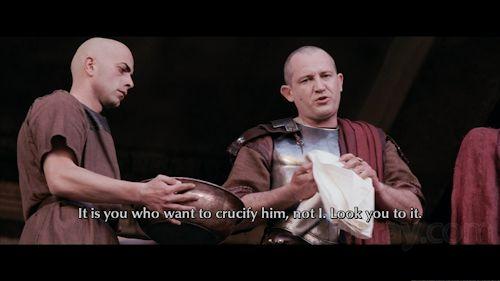 I do this all the time.  “Don’t you want to eat your broccoli?” or “Would you please stop hitting your sister?”  By doing so, I yield authority over to the offenders and let them take control. I choose passivity so I don’t have to be responsible for the outcome.  Pilate is  no different. As governor, he had every right to say, “Look, Jesus didn’t do anything. I’m letting him go, and if you touch him, I’m putting you in time out.”  Instead, Pilate, fearing the crowd and seeing that the whole situation had spiraled out of his comfort zone, takes a bowl of water and symbolically washes his hands of the matter.  I’m going back to the couch… you guys can do whatever you want.

Here’s the thing – when I was younger, I felt bad for Pilate.  I thought he was a decent guy who got caught up in a bad situation and because he washed his hands, he was innocent.  Afterall, the crowd offered to take the blood guilt on themselves (and their children). But the early church didn’t see it that way – in fact the Apostles’ Creed even has a line that says, “I believe in Jesus Christ.. [who] suffered under Pontius Pilate…”  What’s the deal? 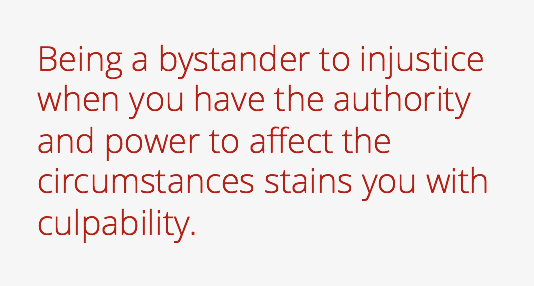 Being passive is not the same as being innocent.  It’s really just that simple. Being a bystander to injustice when you havethe authority and power to affect the circumstances stains you with culpability.  Pilate, who had the ability to set Jesus free, prioritized his own political career and personal comfort over justice and just simple decency (also he ignored his wife, which is a bad idea in general).  But what about us? What does this mean for us?

First, those of us who are not Christians must understand that all of humanity is guilty of rejecting God in order to seek out what “works better for me.”  This rebellion against God can look a lot of different ways – sometimes violent and active, but usually it’s passive, with a smile: I like Jesus sure but I’m not that bad a person.  The funny thing is the response of Pilate is essentially the same – when the Jews said “crucify Jesus because he’s not that good”, Pilate said, “I’m not going to get involved because I’m not that bad.”  It turns out though that Pilate really is that bad, and his passivity was, at its heart, a rejection of God’s Son.  But the good news is that Jesus actually is that good.  His death paid the price of that passive rebellion in our hearts, actively opening the way for us to move from condemned spectator to adopted family member.

Secondly, for those of us who are Christians – we often think we have nothing to offer this world – all the darkness that’s out there, surely there’s nothing I can do.  Like you said, Phill, being a bystander to injustice when you have the authority and power to affect the circumstances… Well, as Christians, Jesus declared that he has ultimate authority over all the earth (Jn 16:23, Matt. 16:18-19, Matthew 28;18) and has sent us out as agents of that authority and power to proclaim the good news, make disciples, and be salt and light in our world.  The Holy Spirit, God himself, dwells in the heart of every believer – Christian, you are empowered to affect this world!

Passivity and Christianity are a complete contradiction: Jesus didn’t rescue us so that we can sit idly by watching the world slip deeper and deeper into darkness.  How can we be active? 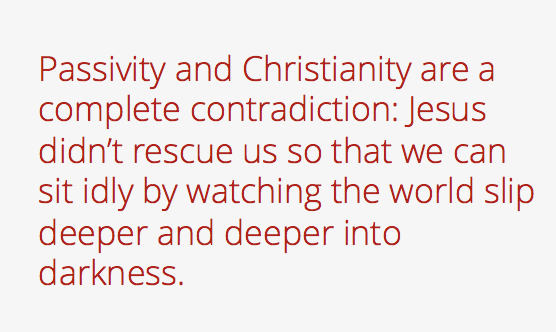 The great tragedy for Pilate is that, as far as we know, he never recovered from this moment of passivity.  The “peace” he was trying to maintain would never come. He would forever be known for the moment when he should have done something but chose to walk away.  As a parent, my children don’t need a passive dad.  They need one who will get down in the mud with them to love them and teach them what is right and wrong. As a Christian, God did not save me so I can coast into eternity with my eyes closed, ears plugged, oblivious to the brokenness around me.  Jesus certainly wasn’t passive when it came to rescuing me. I don’t ever want to be passive in representing him.