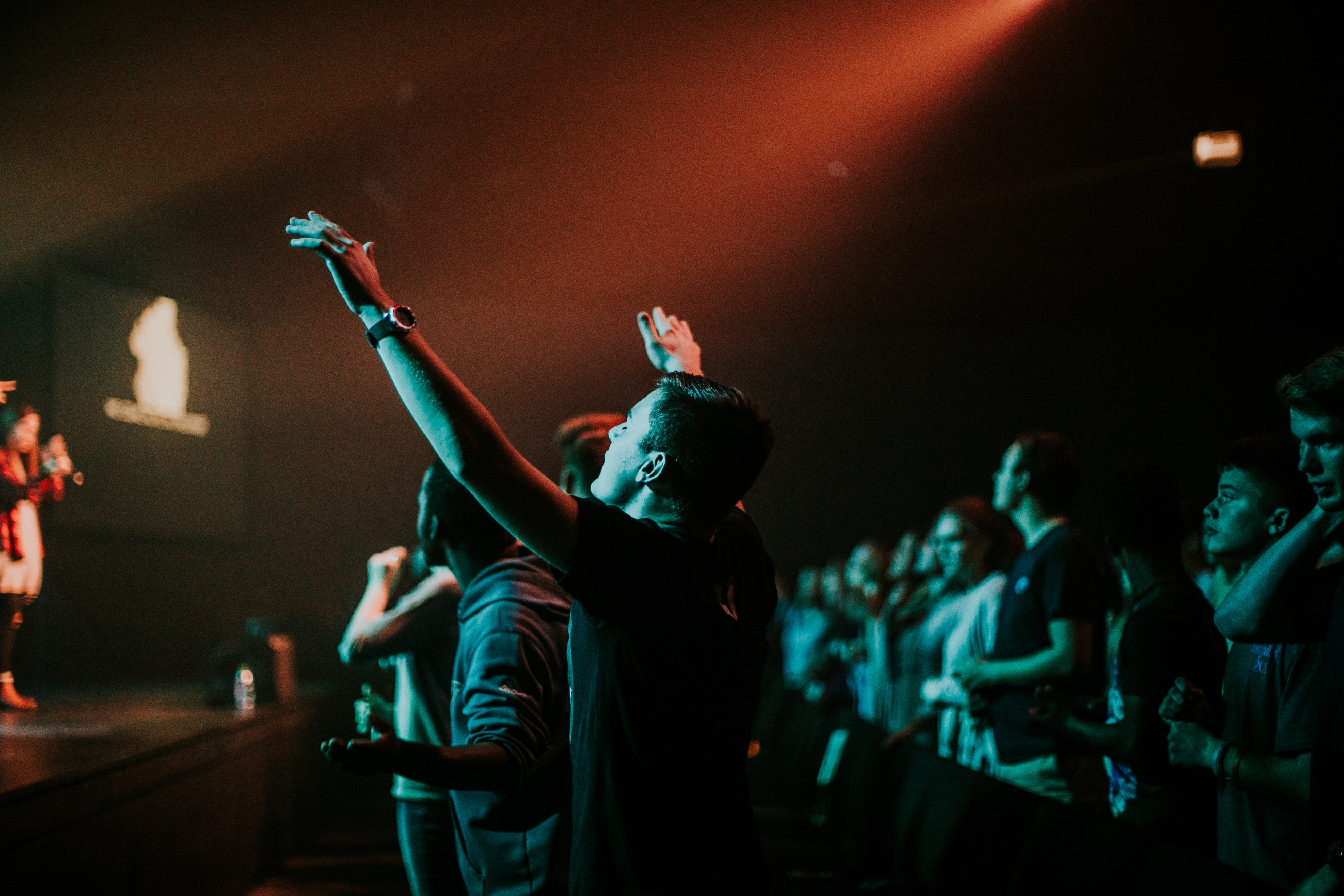 Worship is a word our culture tends to use improperly or to look at with disgust. For example it’s okay to worship your idol as long as what you mean by worshiping, is that you love them a lot, you do whatever they say, you defend their honor even when they say and do awful things, and you pay them money to listen to their words of wisdom and memorize their songs. On the flipside if what you mean by worshiping is that you are ascribing to a set of core beliefs based upon an event in history and a hope in eternal life and a lifestyle that doesn’t compromise, well, you are looked upon as one whose draconian outdated views have brainwashed you and clearly you are no longer relevant nor welcome to the conversation.

Seriously, what happened here? How did our American mainstream culture suddenly flip from being a place where those with religious affiliation and devotion were given much respect and honor to now, being people in society that are equivalent to a benign tumor at best and at worst a terrorist to what is good and decent? Now on the one hand, I’m not a fool to think that the Enemy hasn’t gripped our culture by the throat and perverted things once thought of as holy as now completely defiled. However, it might be that for those of us who feel the weight of the culture pushing up against our faith that we haven’t helped our own cause. Purity of worship has seen better days.

Now if your first thought is “Yeah, tell the heathens to back off” or you have aligned your faith to a political party, then sadly you are part of the problem. But first let me get to where I think we need to start the conversation. What is real worship?

Real worship is composed of what we believe, what we feel, and what we do. In seminary, we called this orthodoxy, orthopathy, and orthopraxy. Ortho→ like orthodontist. Ortho means straight or right. Doxy means glory, but is used to represent the right thinking associated with faith. Pathy means feeling. Praxy means practice. Orthodoxy=Right Thinking. Orthopathy: Right Feeling. Orthopraxy: Right Doing (Action). 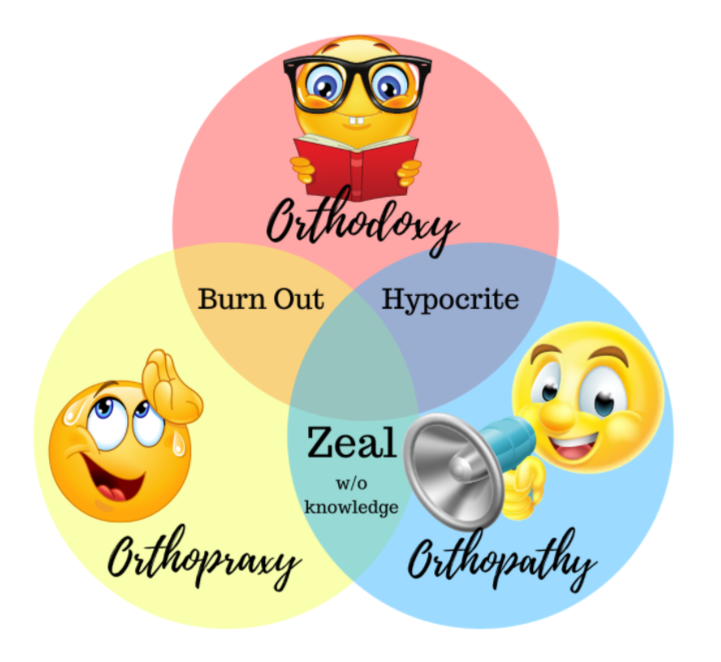 Now we resist using these three things in harmony for a lot of reasons, but I think it mainly has to do with our wiring. Either nature (being born in sin) or nurture (being raised in sin). Either way what God designed to be perfect, sin marred. But it manifests itself like this.

Seminary student : one who is constantly thinking and learning new things about God, but isn’t seeing his heart or hands activated to worship.

Hourly Employee: one who is just doing a job. The first opportunity that there might be something better, I’m out.

Or a pep rally leader: Doing a whole lot of passionate yelling, but not necessarily engaging the brain or doing any activity that would be associated with what that person passionate is talking about.

In fact it’s more than that, you combine a seminary student (head) with a pep rally leader (heart), then all of a sudden, you have a hypocrite--the classic Pharisee, because they are not practicing what they are preaching. Or if you combine a seminary student (head) with a hard worker (hands) then you get burnt out from work that you know is the right thing, but your heart isn’t in it. Or if you are a hard worker who is passionate about whatever they are doing, they have someone who has zeal without any knowledge.

Okay so we understand that all three orthodoxy, orthopraxy, and orthopathy are a part of the Christian life. But what does that look like? I think this is a fair question. It means having a proper understanding of Christian doctrine, an identity is inextricably linked to the love that God has for them, and finally consistently doing the right thing. When you read that, you probably would feel disqualified. It can feel like we have a checklist of to-dos and all of a sudden our worship doesn’t feel organic, but rather forced. So how is it possible to worship God where you cover all that true worship is supposed to cover and not be a person who then becomes works based and not grace based.

This reminds me of Joshua giving a final rally cry to the people of Israel before they fully took on the land that was to be their inheritance. He challenged them to decide that day who they would worship. Would be the gods of their past that they left in Egypt? Would it be the gods of the land in which they were entering? Or would they just look to their own eyes to find what was right for themselves. Joshua said, “As for me and my house, we will serve the Lord.”

The rest of the Israelites responded, with, “Far be it from us that we should forsake the Lord to serve other gods, 17 for it is the Lord our God who brought us and our fathers up from the land of Egypt, out of the house of slavery, and who did those great signs in our sight and preserved us in all the way that we went, and among all the peoples through whom we passed. 18 And the Lord drove out before us all the peoples, the Amorites who lived in the land. Therefore we also will serve the Lord, for he is our God.”

When Joshua hears that, he doesn’t simply go, “Awesome! I knew I could count on you.” But rather he said, “You are not able to serve the Lord, for he is a holy God.”

He then warned them that the Lord who is a jealous God would consume them after they turned from Him.

To which, if you are a motivational speaker, perhaps you are trying to build the Israelite crowd into a religious frenzy so that they go and obey God whole-heartedly. However, if you are a parent, you can only manipulate the behavior of your kid so much before their true colors come out. So, I don’t think Joshua was using a trick of rhetoric, but rather was using his discernment. He knew the human heart. He had watched Moses in frustration get an early graduation to heaven and miss out on seeing with mortal eyes what he had been walking toward for 40 years.

What Joshua predicted happened. Judges, the book immediately following Joshua, has a theme verse found in Judges 17 and Judges 25. “In those days there was no king in Israel. Everyone did what was right in his own eyes.”

The Israelites no longer sought God. Their pride got in the way. They took care of disappointment, frustration, and hurt in absurd ways. Ways that even pagan religions didn’t do. And they also served the gods of the culture. They worshiped local carved images. They intermarried with people who didn’t believe in the God who brought them out of Egypt and their lives were consumed with idolatry and pride. Everything that Joshua said came true. Sure there were moments of revival. But the revival lasted only as long as a great personality was around to give physical presence to the Spiritual One he wholeheartedly worshiped.

We saw it when Adam ate the fruit. We saw it when Abraham gave his wife to a harem (twice). We saw it when David slept with the wife of his battle buddy, Uriah and then murdered him to cover it up. We saw it when Solomon started worshiping other gods to appease his wives. The Bible is full of great worship fails. Jeremiah wrote about the condition of the heart, “The heart is deceitful above all things, and desperately sick; who can understand it?”

Paul after receiving the Holy Spirit wrote, “For I do not understand my own actions. For I do not do what I want, but I do the very thing I hate.“

He then wrote about the hope that he did have in his distress. “Wretched man that I am! Who will deliver me from this body of death? 25 Thanks be to God through Jesus Christ our Lord! So then, I myself serve the law of God with my mind, but with my flesh I serve the law of sin.”

Romans 8:1 points to the release that comes from experiencing the power of God in his life. “There is therefore now no condemnation for those who are in Christ Jesus.”

But we have to train our minds to trust like that. And that is done by studying God’s Word, praying that God would transform you by the renewing your mind. That by God’s testing you may discern what is the will of God, what is good and acceptable and perfect.

It is done also by doing the right things. It is done in letting your heart become vulnerable to God. In all the places we close up. In all the places where we have been let down, wounded, and felt abandoned, we must recognize that God was working in a way we may not understand and will not understand this side of glory. Yet, we trust him, and open our heart to him. And we can’t do it. Joshua’s point. Jeremiah’s point. Paul’s point. We can’t do it. We can only use the faith that God has given us to bring us back to the place where we put ourselves willingly under the control and care of the one who gave everything so that we might inherit more than we could ever imagine, in a time where we didn’t deserve it.