Join us in person at 8:15AM outside at Calvary Worship Center, 9AM & 10:45AM in person and online at Wells Branch Community Church  via Facebook, YouTube, or Twitch. For in-service guidelines click here!

Electric Church: How Should We Think About Technology In the Church 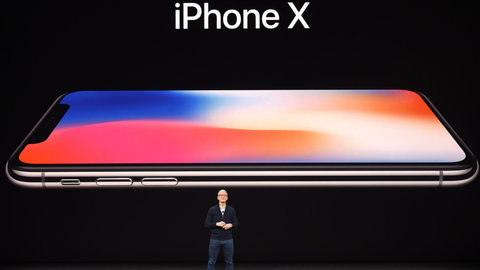 Back in 2003 I got my first cell phone.  It was by today’s standards barely a toy, but at the time it meant so much: freedom, independence, power, and yes, snake and tiny tiny tetris.  It would be another ten years before I joined the staff at Wells Branch Community Church and, still rocking a flip phone, my senior pastor dropped an iPhone 4 in my lap.  “I’m going to need you to use this, Phill.”

“Oh no thanks, my flip phone works just fine.”

While I had long been a tech junkie (yes, even as a late adopter of the iPhone), this was my first real plunge into the world of church tech.  From hardware (I always thought it was interesting the American evangelical church’s obsession with Apple hardware) to software (Spotify, Planning Center, Children’s ministry check in, CRMs, podcasts and endless Bible apps), it’s hard to discern when usefulness ends and obsession begins.

While many of us don’t think about technology as it relates to church and spirituality, it is no doubt a big part of our modern experience of life.  I really enjoyed following Colin, one of our church’s worship and media team leaders, as he live tweeted the Apple event this past week.  There was so much hype and, depending on where you stand with Apple, much elation or much disappointment with the announcement of things like Apple Stores being called “Town Squares” and the new(ish) iPhone X.  As much attention as Apple is getting from its event, it really made me take a moment to think as a Christian what all of this means for us as the church.

Is technology something we as a church should resist?  Is our pursuit of better and brighter distracting us from experiencing God or does it facilitate opportunities that had since been unavailable to humanity?

It’s a question worth asking, especially now that more and more churches, and Christians individually, are being inundated with more and more tech at an accelerated rate.  Not to mention the increasing costs of acquiring and maintaining that technology in our churches and in our lives (seriously, if you’re thinking about spending $1000 on a phone, or a church is getting ready to drop tens of thousands on a new sound system, it warrants a conversation about whether that’s a good idea or not.)  Honestly I was a little miffed at the idea that I would “need” an iphone to be a pastor here, but truthfully, I can understand why I would be told that.  It’s… extremely helpful.  And extremely distracting.

When we open the story of scripture, it begins with an incredible scene of creativity and power.  Literally out of nothing, God creates everything.  And at the very end, almost explicitly he communicates to us that everything he made would ultimately culminate in the special creation of humanity.  Man and woman, it says, were created in God’s image.  That is our identity.  Our purpose is found later when God gives humanity its first mission: to have dominion over creation and in Genesis 2:15, speaking of the Garden of Eden, to “work it and keep it.”  Other translations say “till it” while others say “cultivate it.”  One way or another comes the idea that Adam was to be a creative agent in what was already made; he was to reflect God’s character and image, specifically in God’s creativity (as this had been basically the vast majority of

what Adam had seen God do up to this point).  As John Dyer says in his book From the Garden to the City:

Whatever he chose to do, he would be taking what God had made and remaking it into a creation of his own. And in doing so, Adam would be reflecting the creativity of his Creator (who, at this point in the story, had done little but create).

All of this points to the fundamental truth that the human capacity to create, to form things that are useful or beautiful, comes from the core of who we are: image bearers of God.

Thus technology, in its ability to cultivate what God desires in us as human beings, relationship, worship, generosity, peace, all flows out of this original charge before the fall.

If the original nature and intent of technology can find its root in the creativity God endowed us with, the question is how does technology’s function advance God’s agenda for humanity.  That is, more specifically, how does technology advance the narrative of scripture so that we here in the 21st century have a fuller experience and understanding of who God is and what he’s about? 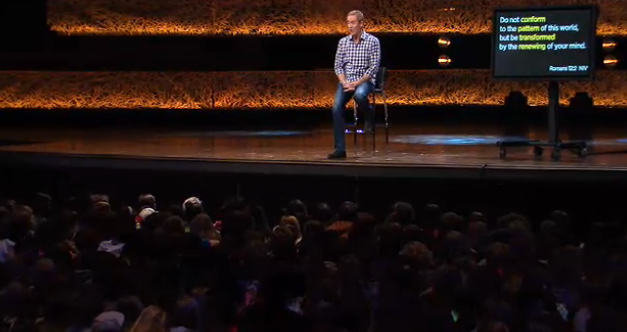 This is really where the rubber meets the road in my opinion, because it’s where so much of the criticism comes.  I remember sitting in a preaching class in my seminary days when the person next to me announced, almost proudly, that he refused to use powerpoint (…and yes, I can feel all the eye-rolls coming from church multimedia teams) when he preached because it “distracted people from God’s Word.”

I rolled my eyes too.

But seriously though, should we as a church, and individually as Christians avoid technology because it distracts us from God?  Well, the argument, as contemporary as it may seem, is actually an extremely old one.  As much as we think the discussion of tech in the church is about how teenagers just stare at their phones during service, it’s far older.  Remember that for every person who thinks it’s wrong to throw up the scripture reading on the projector screen because it “takes away from people reading their own Bibles”, there was another guy in the 1400s complaining that the tech of that century, the printing press, was “taking

away from people listening to their priests,” or some guy in the first century complaining that the technology of that day, paper, was taking away from the teaching of Jesus and the Apostles.  After all, Jesus didn’t write a single word down so why should we?

Really technology is all about function, and over human history, God has used technology of one sort or the other to ensure the Great Commission, the “make disciples of all nations” can happen despite the very obvious limitations of our humanity.  Not only can I now be in multiple places at once, but the fact that my words can be read or heard by a stranger purely for their message and not distracted by my character flaws is miraculous.  The printing press in fact has likely done more to preserve the integrity of God’s word than anything in human history.

Understanding that God is and has been using technology to advance the story and message of redemption throughout the world is so important to acknowledge.  It is so easy to dismiss technology as something “artificial” and “evil,” something to be resisted in an effort  to “simplify” our experience of God.  Get back to the basics.   But what is “basic” is completely relative, and almost everything we think of as basic was cutting edge technology at one point in history.

Which all brings us to the idea that God takes what we make, regardless of its intent or (mis)use and redeems it.  The church, in fact has been and continues to be a major conduit of God’s redemption of human creativity and technology to bring glory to himself and life to those who love him.  Tech serves the glory of God in the modern, 21st century church in three principal ways:

Accountability – never before in human history have we had so many incredible tools to ensure that our sin natures can be put in check.  Technology doesn’t negotiate.  It doesn’t acquiesce.  It just does what it’s programmed to do.  It doesn’t have moments of weakness and it doesn’t get tempted.  It just does what it’s maker tells it to do.  The church has so much to be grateful for in the way technology has taken the burden of accountability out of our fallen hands.  Tools like Covenant Eyes have saved thousands from pornography, and Children’s ministry check-in software platforms have safeguarded children all over the world from harm.

Accessibility – I mentioned it before, but technology has, throughout human history, allowed people to connect and communicate the message of God, extending the reach of our witness beyond the auditory range of our physical voices.  God’s word is now available in literally thousands of languages in hundreds of different delivery devices; from a simple contraband 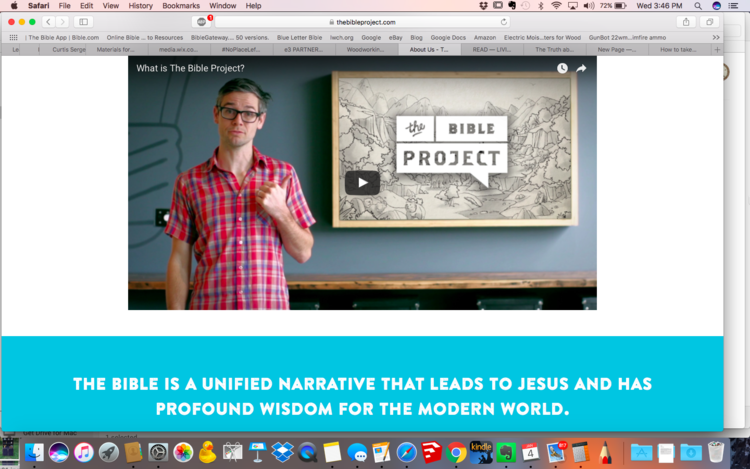 book hidden in someone’s bag in North Korea to a radio station broadcasting into nearly inaccessible villages in the Amazon rainforest to an app you pull up every morning before you head to work.  Resources like sermons, lectures, and books once reserved to monasteries and universities are now available to millions through platforms like YouTube and iTunes.  The Bible Project, for example, has successfully simplified years of seminary level Bible Exposition classes into wonderfully creative, extremely accessible videos that every Christian could watch and learn from.  And beyond learning resources, apps like Facetime and Skype allow us to develop and cultivate relationships with people all over the world.  Just think about how much the ancient Mediterranean churches could have been encouraged if Paul could just Skype them?

Appreciability – Finally, technology has given the church an incredible opportunity to express thoughts and emotions of worship in new and beautiful ways.  God doesn’t just celebrate the functionality of things, he loves creativity!  As technology increases and advances, so too does the ability of wonderfully gifted people to leverage that technology to create incredible photographs, videos, sculptures, paintings, all in service of inclining our hearts towards awe and wonder of the God who made us and saved us!

Ultimately, we have to remember that God is in the business of redemption.  Technology is no exception.  Remember that at the end of the Biblical story, God doesn’t wipe out all technology to get us back to some utopian garden again.  Instead, he takes the things his creatures have made, technology, and redeems it eternally in the New Jerusalem, a city, where he meets with us forever and ever.  The beautiful thing about technology is that for all its faults,  we see that God continues to take broken things, even things intended for harm or evil, and make them beautiful.  Even a very expensive phone.

This, however, doesn’t mean there isn’t a counter-argument in our discussion about technology and the church; there’s much to be said about the perils and evils of technology, too.

Biblically, we see that repeatedly technology has been a direct result of human arrogance, idolatry, and sinfulness.  Sewn fig leaves, a city, a tower, even money all inventions of the corrupted human heart.  We’ll address these next week.

Special thanks to Colin Hemphill and Casey Decker for their help thinking, formulating and writing this post.